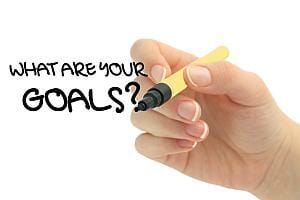 This is the time of year when everyone is talking about their New Year’s Resolutions. I decided a few years back not to make resolutions. To me, resolutions seem too close to rules; “I will go to the gym every day. I won’t eat sugar.” I don’t do well with people, even myself, telling me what I can and cannot do. I get this urge to rebel which sabotages my good intentions. But I still have a thing I want to accomplish. So I have decided to forgo the resolutions for goal setting.

Goals to me, are more of destinations that I am going to. Just like a map on a long journey shows you all the places you need to go through before reaching your destination; long term goals, short term goals and actions steps direct us to get where we want to be and mark our progress along the way. We may need to take a detour or stop for a rest, but by focusing on our end destination we will eventually get there.

Harvard did a study back in 1979 where it asked their MBA students about their goals, specifically if they had them and if they were written. They found that only 3% had written goals, 13% had goals that were not written down, and the remaining 84% had no goals. 10 years later they interviewed those students and found that the 13% who had goals were earning on average, twice as much as the 84% without goals. Even more amazing, the 3% with clearly written goals were earning on average 10x more than the other 97%. This inspires me to find time to make written goals! END_OF_DOCUMENT_TOKEN_TO_BE_REPLACED